The store will not work correctly in the case when cookies are disabled.

Dominique Raccah has been named FutureBook's Most Inspiring Digital Publishing Person of 2013.

"I am honored and more than a little overwhelmed to be receiving this award," Raccach said. "But the truth is, this award isn't actually about me. It's really about what we've all accomplished together. This digital transformation has created a community among us; one that fosters innovation, shares successes and failures, learns from one another, helps each other, and one that's worldwide."

The Bookseller's FutureBook Awards are sponsored by Frankfurt Book Fair and were announced at the FutureBook Conference on November 21st. Others nominated for the award include Goodreads founder and CEO Otis Chandler; Richard Nash, head of partnerships and content at Small Demons; Charlie Redmayne, now CEO of HarperCollins, formerly CEO of Pottermore; and Macmillan CEO John Sargent. Dominuque will join many other digital publishing innovators in receiving this award, such as Faber CEO Stephen Page and Rebecca Smart, Osprey managing director.

"Dominique has a real passion for digital, and for transforming her business," Philip Jones, editor of The Bookseller and co-founder of FutureBook.net, said. "She showcases every day, on Twitter, in her office, and at conferences, all the attributes an inspiring digital leader should possess. She is knowledgeable, enthusiastic, open and, most importantly, practices what she preaches."

Raccah was also recently named the Muriel Siebert Entrepreneurial Champion by The Committee of 200 (C200) during its Annual Luminary Awards to Exceptional Women, and Sourcebooks was honored as 2013 Book Publishing Innovator of the Year by Book Business and Publishing Executive magazines.

Dominique has overseen the launch of Sourcebooks' Put Me In the Story® personalized children's book platform, which includes partnerships with Sesame Workshop®, Hello Kitty®, The Berenstain Bears®, and Anne Geddes.

The FutureBook Innovation Awards were the first to recognize digital innovation across the global publishing business and we are very proud of Dominique for this remarkable accomplishment.

The Changing World of Children's Books 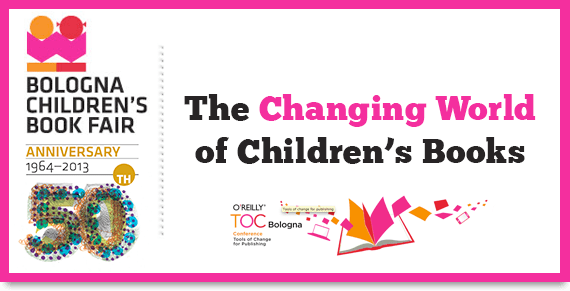 This past week was the 50th anniversary of the Bologna Children's Book Fair and saw our very own CEO and publisher, Dominique Raccah, provide the keynote address at the Tools of Change 2013 event on the day before the fair.

In her presentation on "The Changing World of Children's Books" she spoke about how the empowering of children would change publishing as we know it. Interactive platforms, such as Put Me in the Story, are becoming increasingly popular in the U.S. Raccah stated, "We are at a space where books and print and apps intersect. Children respond to interactivity, as do parents because it is part of a virtuous circle of helping their child read."

You can view Raccah's entire presentation below.

17611 view(s)
Read More
1
Categories
Recent Posts
All content and design copyright © Put Me In The Story 2021. All Rights Reserved.